In the last year I’ve done quite a bit. I went to Maine, Massachusetts, Pennsylvania, Texas, and Canada. I explored Albany, Schenectady, Troy, Saratoga, the Adirondacks, and Western New York. With every adventure I tried something new and as the year comes to an end I decided to take a look at the tastiest, and most liked meals of 2017.

10. I started off the year warming up from the January cold with a warm apple crisp waffle from the Iron Roost. Are you a sweet or savory person? They’ve got both. Check this Ballston Spa location out, but be sure to plan ahead. The tiny waffle shop is guaranteed to be busy on a Saturday morning.

9. Flash forward to much warmer days during an August getaway in the Adirondack Mountains and a tasty, picture-perfect homemade egg sandwich along Raquette Lake. I don’t typically feature food that’s homemade, but this flexing my culinary muscles has been a big part of 2017 and this ham, egg, and cheese was one success of many not so pretty self-made meals.

8. Also this summer was an August trip to Vacationland. I mean of course, the beautiful state of Maine. I couldn’t mention Maine without referencing the food for which they are most famous for, fresh New England lobster. At our favorite spot in Ogunquit, The Oarweed, this lobster roll was perfect alongside a large rum punch.

7. Fall in the Empire State means basic apple picking pictures and cider donuts. I didn’t pick any apples, but I drank plenty in the form of hard cider at the Indian Ladder Farms brewery, finishing off the afternoon with the quintessential fall food: a freshly made cider donut. 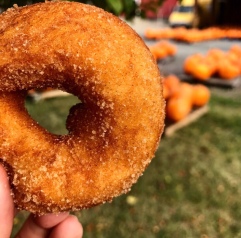 6. Druthers Brewing Company has made it into many blog posts here on Erin Eats Upstate. I don’t want to keep featuring them, because there are so many other restaurants to be featured, but their tasty food is a fan favorite and could certainly define 2017. With a seasonally changing menu, the most liked meals, like Korean BBQ burrito and philly cheese sliders from the Albany location are unfortunately no longer available.

5. I never expected my cinnamon roll pancakes to be the 5th most liked photo on my Instagram for 2017, but these fluffy hot cakes from Iron Gate Cafe were just that. A refurbished mansion turned into a hidden, but not so hidden weekend brunch spot, the Iron Gate Cafe is the go to when it comes to the most important meal of the day.

4. The Sinclair in Cambridge, Massachusetts doubles as a concert venue and foodie spot. My waffle flight this fall was an Instagram hit and perfect for my indecisive self. Flights should be options for all foods, especially when then menu is so good you want to try it all.

3. I haven’t gotten to visit Liza’s in their new, expanded, Troy location, but it’s certainly on the list. 2017 was definitely a year full of acai bowls, and this massive bowl from Liza’s took the crown as biggest and most colorful. I haven’t had one of these fruity meals in quite a while, but I think it’s time to blend one up. 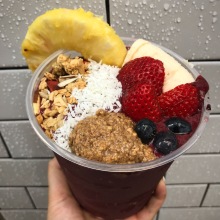 2. Slidin’ Dirty was every where this year, from their flagship in Troy, opening a new location in Schenectady, and the faithful food truck serving up sliders at every event and brewery without fail. A mix from undercooked to phenomenal, Slidin’ Dirty was all over the map. Despite the mixed results, the dirty hottie and dirty colonel were picture perfect and just the right size.

1. My most liked photo of 2017 (so far) was the s’mores freak frappe from Boston Burger Co. on Boylston Street in Boston. Despite the fact that I didn’t actually eat, or even drink this shake, it marks one of the best weekends of the year as I took on Beantown for St. Patrick’s Day weekend. I did get a burger and shake from Boston Burger Co., in fact my shake had an entire slice of cake on top, but these toasted marshmallows captured everyone’s attention. Outrageous desserts and fully loaded burgers, like the ones on the menu at Boston Burger Co. were everywhere this year and I’m certainly not complaining.

Honorable mentions in 2017 included avocado toast from 3Fish Coffee, french dip from Albany Ale & Oyster, and the grit tots from the Cuckoo’s Nest, all of which left me stuffed, but craving for more. 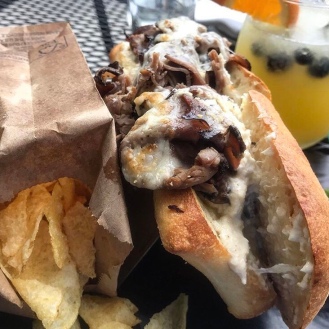 What was the best thing you ate this year? Was it a loaded up dessert? Something made of sweet potato? A big juicy burger? I’d love to know.

P.S. Here’s to another year of a feed full of Instagrammable eats. Don’t forget to follow along.