It’s origin comes from a noun meaning one’s own way, choice, or preference. But here in Upstate New York, Druthers is better known as the popular restaurant and brewery. If I had my druthers, I’d be eating there every day!

My last few attempts to dine at the downtown Albany location failed miserably as wait times maxed out around an hour. Finally, on a Wednesday evening around 6:30, there was no wait and I was seated at a table for two.

The menus at Druthers change seasonally, so while some staples remain the same, seasonal varieties of everything from mac & cheese to salad are added. When I first sat down I was sure that I was going to order mac & cheese, but found myself conflicted. I glanced across the dining room taking in the plates of my fellow diners. The scent of wood-fired pizzas had me reconsidering my previous intention of ordering mac & cheese. I took in the unique snacks and entrees, thinking about what was going to taste best with my Golden Rule Pilsner. 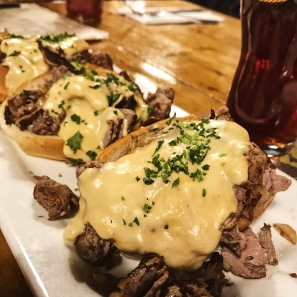 On a regular day I probably wouldn’t get an appetizer, both in an effort to save money and avoid extra calories, but since we had a giftcard we figured why not. On a previous visit to Druthers, we tried the calamari so we knew that we wanted to try something different. This go around we ordered the Philly cheesesteak sliders and it was certainly a worthwhile decision. Warm rolls, piled high with beef and sautéed onions, and covered with melted cheese, these sliders could’ve easily been an entree in themselves.

As far as my Korean bbq burrito, I was unexpectedly surprised with how much I enjoyed it. Outwardly it appeared just like any regular burrito, a tortilla filled with meat, rice, and vegetables. On the inside however, it tasted unlike anything I’d ever had before. It was stuffed with soy-marinated short rib, house kimchi, brown rice, gojuchang ranch, cilantro, and crispy wontons. If you’ve read any of my previous posts, you know that I am already a fan of burritos and Korean, so it’s no surprise that the fusion of the two was a hit in my book. A burrito loaded to the max with flavorful ingredients, and already full of beer and sliders, I was only able to eat half, taking the other half home for lunch the next day.

While I didn’t choose the mac & cheese like I had previously intended, my dinner date did. On our last visit, Chris had the Loaded Mac, complete with bacon, smoked chicken, ranch, and bbq sauce. He was planning to get the same dish, but after some prompting from his pesky girlfriend (me) he tried something new, the Chili Mac. This version included beef chili, pickled jalapeno, cheddar, sour cream, fritos, and scallions. Unfortunately my pestering to try something new was not the best choice, as the Chili Mac didn’t quite live up to the predecessor, Loaded Mac. Perhaps it was too creamy, with the sour cream and cheese combination, not bad but something about it just wasn’t as good. 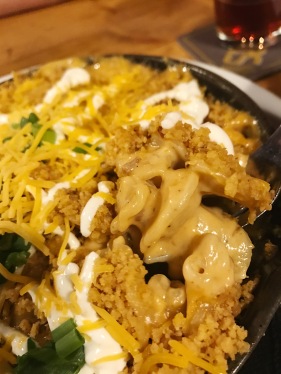 With summer just around the corner, I foresee plenty of visits to Saratoga, while waiting patiently for the rumored August opening in Schenectady. My next pick? Wood-fired pizza. Or will it be the next seasonal mac and cheese? We’ll hopefully find out soon!