When the snow started falling in the early afternoon I thought my plans were ruined. But despite the wintry weather, the streets of Schenectady were as full as the bellies of those who were walking them, and as the sun began to set, the 3rd Annual Chili Chowdown was in full swing.

As the weather gods would have it, a snowy Saturday was the perfect match for an afternoon full of hearty, hot chili. I kicked off the afternoon with a spicy sample of chili from Nico’s Rooftop Tavern. Full of hearty beef and beans, jalapeño peppers, and a frito chip on top, from the first bite to the last, Nico’s chili encompassed everything a classic chili should be. In fact, despite the heat, it was so good I ate it all before I realized I forgot to take a photo!

The next stop was Johnny’s for a sample with all the works. The chili was certainly tamer, cooling down the burning left behind from Nico’s. Where Johnny’s gets points is in the details. Topping their beef chili with sour cream, tomato, and lettuce, complete with a pita chip on top, it was hearty, filling, and picture perfect.

Soon enough we were on to the next, quickly heading down Jay Street. Texas Red is how the team at Ambition Cafe described their chili. Burn your tongue hot and full of pulled beef it was one of the most unique chilis of the day. It was tasty, but seemed better suited for a sandwich than in a bowl with a spoon.

Bel Cibo was a surprising front runner of the day serving a Nine Pin Cider braised pulled pork and bean chili. I’ve never been to Bel Cibo before, though I’ve walked passed it many times. With just a few tables the restaurant offers a small cafe feel, and if the chili was any indication, the food is pretty good too. 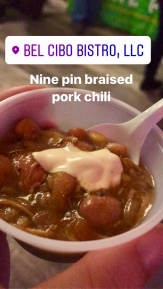 Next up was the tour of Broadway, kicking it off at Pinhead Susans. With a cinnamon undertone, the chili was much sweeter than expected. Right next door at Centre Street Pub, we chowed down on a traditional chili that I loaded up with as much cheese as possible. Then, taking a turn down Union Street to Maria’s Cafe, we jumped in to the only vegetarian chili of the day. Full of peppers and beans, we didn’t even miss the meat. 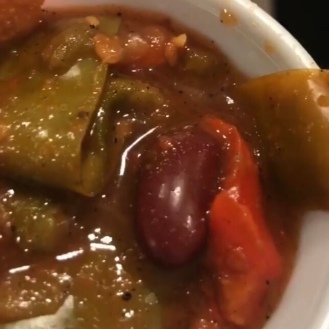 As the last stop on the Chili Chowdown, Rare did not disappoint. When the restaurant first opened, it didn’t make the best first impression with me, but the food has always been good during the last few walking tours and the chili was no exception. Their cajun style chili with 4 different meats and a side of habanero corn bread definitely solidified the thought that I need to give Rare another chance. 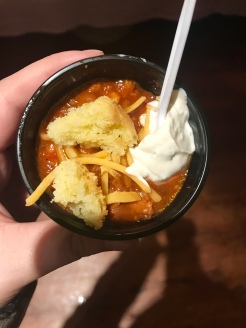 Part of the event is the craft brew trail, where local breweries are paired with participating restaurants. Instead of tasting the beers at each location, I was focused on the chili, but of course I had to try at least one. Although Slidin’ Dirty did not have chili, they did have Shmaltz Brewing. I ordered the Hop Manna IPA and it earned at 10 out of 10.

Like Wing Walk and Soup Stroll before it, it’s best to come to these walks on an empty stomach because you’re sure to be full by the time you leave. I made it to 7 stops during Chili Chowdown but there were still a few I missed. Unfortunately I didn’t get to Katie O’Byrnes, Backstage Pub, Hunters on Jay, Great Flats, or Manhattan Exchange because I just didn’t have any more room to try.

What’s your favorite winter comfort food? Let me know in the comments and as always, follow along on Instagram.