On Thursday afternoon I unlocked my phone for my usual afternoon scroll through Instagram. I opened to a post from The Alt, a weekly newspaper I pick up whenever I see it out and about. The post was promoting a contest– free tickets to select events at the Saratoga Wine and Food Festival. I’ve entered Instagram contests before, liking posts and tagging friends with no real chance of winning, but I never give up hope that someday I will win, and so I once again commented below to enter.

On Friday, pre-occupied with work and life, I had already forgotten about the contest I had entered not even 24 hours prior. I quickly recalled when I received a direct message from The Alt letting me know that I had won 2 tickets to the Fired Up! Event at the Saratoga Wine and Food Festival. No time to go home and change, I hoped that the weather would hold up as I rushed from work to Saratoga Performing Arts Center. Upon arrival I found my way to the box office to pick up my tickets, got my wristband and followed the path of guests leading to a beautiful tent full of music, food, and fun.

My eyes were immediately drawn to the Stella Artois area. Adirondack chairs lined fire pits while white lights and big red umbrellas covered the tables alongside a large silver trailer that doubled as the bar. Beside the bar, a Stella Artois photo backdrop was calling my name. With a sip of Cidre and a picture with my new Stella chalice, I was ready to take on the food.

There were 8 participants, competing for crowd approval and serving their small plates to a panel of judges. The theme of the evening was barbecue, and each of the participants were serving up dishes from tri-tip steak to grilled pork shoulder. First, I visited [Forged], and took on the harissa tri-tip with duck fat fingerling potato. I’ve never heard of [Forged] and I would consider visiting their Hudson Falls restaurant, but their steak was by far my least favorite for one reason. At food tastings like this, it’s important for the dishes to be easy to eat. Often times it’s crowded and tables are limited, combine this atmosphere with only a plastic fork as a utensil, and you get a very difficult eating situation. While the dish was probably great, it was very hard to eat the steak this way, making the first tasting one of my least favorite of the evening.

Next stop was the Lunazul Tequila tent for an Apple Cider Margarita that I sipped alongside plate number two, Ama Cocina’s stuffed summer sopes with grilled deconstructed street corn. On top sat flavorful grilled tri-tip with pico de gallo, queso fresco, lime aioli and cotija cheese. Let me tell you, the fried corn masa dough was everything, but the small cup of grilled street corn was the icing on the cake.

We wasted no time as we closed in on the last sip of the margarita and moved straight across the tent to the Woodford Reserve bar. They were serving up a mixed drink with berries and bourbon. I’m not a bourbon kind of girl, but I drank it nonetheless. Ready for something more to munch on, I visited the 677 Prime table to taste their Korean bbq tri-tip taco with jicama slaw. Jicama is one of those ingredients i’ve heard about many times on shows like Chopped but never tried in real life. The taco included many different ingredients including sesame garlic aioli, jalapeno, sweet chili vinaigrette, jicama, sweet corn, cabbage, and chicharrones. I decided that this taco was worth sitting down for and I was right. Flavorful yet not overwhelming, and significantly easier to eat, the 677 Prime taco was only my third plate of the night but I had already determined it was definitely a contender for top dish. 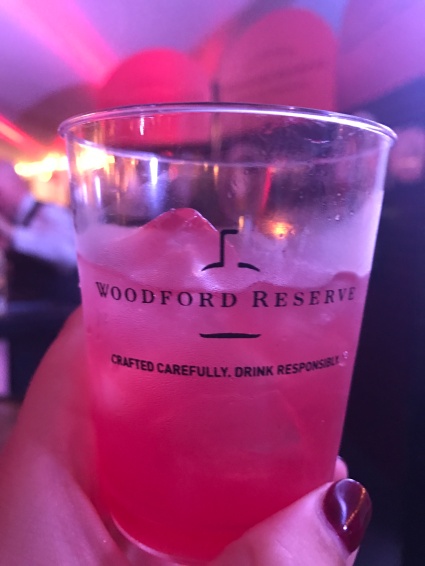 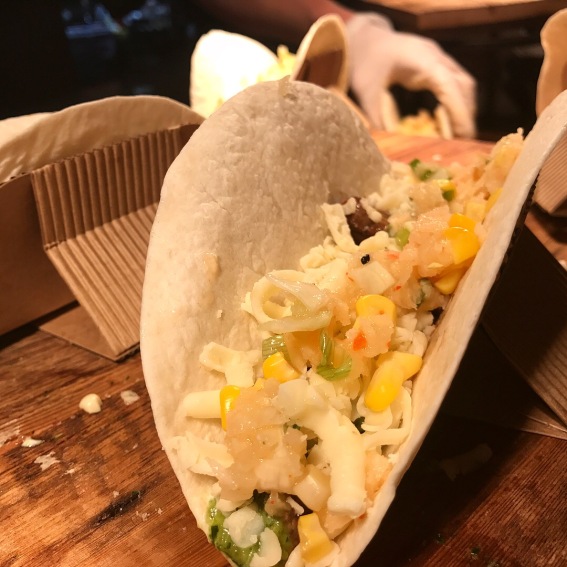 After a stroll around the tent, scoping out the Tito’s bar, and taking a second to check out the Maserati’s parked on the lawn I moved on to the next tasting. The pulled pork from Salt and Char was tasty though the summer vegetables it was served with weren’t my favorite. My biggest complaint though– the fact that this tasting required two separate dishes. One plate hosted the chili charred shishito peppers and pimento cheese while another hosted the pulled pork and corn succotash. If my hands are full of dishes how am I supposed to eat? More importantly, how am I supposed to take a picture?!

Next up was a Capital Region favorite, Druthers Brewing! While the Druthers Brewing plating was an A+ it was the bourbon ketchup and pickle brined french fries that gave the dish life. Right next door, Max London’s char grilled Brazilian sirloin piri piri with black bean croquettes was next level in terms of spice. Yes, I had to Google piri piri, and yes it was really, really good. Of course anything fried is delicious so the croquette was the perfect touch. 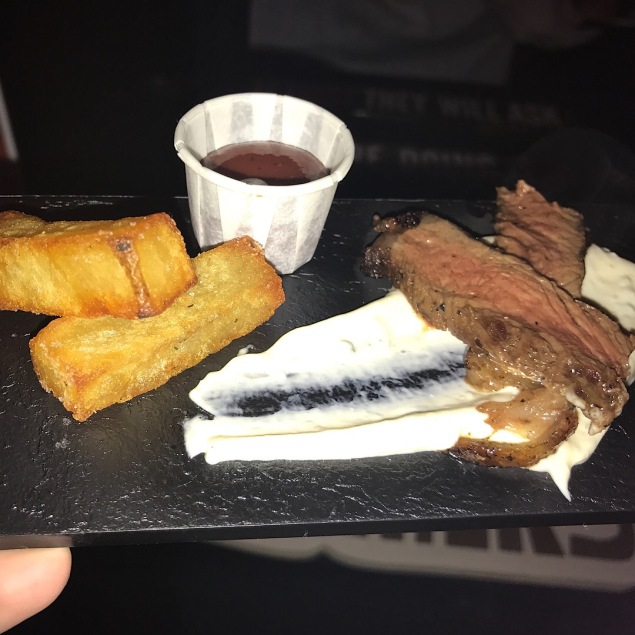 Morrissey’s Lounge was at the end of the tent and by this time I had eaten my fill, but I grabbed a glass of red blend and took my plate of grilled hangar steak with bone marrow chimichurri, peruvian potato salad, and smoked baby corn. The hangar steak was by far the most well cooked of the evening and had I known this previously, I may have opted to stop here before filling up on some of the other dishes.

The night was coming to a close and voting was about to start so we moved quickly towards a final stop to taste what Brown’s Brewing Company had to offer. Brown’s had it tough.  They too had a taco that didn’t quite live up to it’s predecessors from Ama Cocina and 677 Prime. Though they added an extra element with roasted corn and tomato salad, it was the other brewery, Druthers, that brought home the official win of the night.

The evening wasn’t just food and drink, it was music as well. Inside the food tent there was a DJ entertaining a crowd of dancers while outside another crowd was jamming out at the silent disco. If you’ve never been to a silent disco, it involves headphones and a few different station choices. In this case, the headphones with the green lights were playing 80’s hits and the headphones with the blue lights played today’s pop hits. I am a terrible dancer, with no rhythm and no ability to carry a tune, but I found myself dancing (slightly and without much coordination) to the music inside my headphones.

I’ve never won an Instagram contest and I’ve never been to Saratoga Wine and Food Festival, two things I can now check off my bucket list. Tastings like these are what foodie dreams are made of and I am beyond grateful I got to attend!

Keep up with my food adventures on Facebook & Instagram. Have any food festivals you think I should go to? Let me know in the comments!