If you’ve ever been to Rochester, or even within 100 miles of the central New York city, you’ve without a doubt heard of the famous Garbage Plate. Although initially hesitant to trying the mish-mash of greasy cheeseburgers, spicy meat sauce, macaroni salad, and french fries, today I find myself craving a plate quite often. 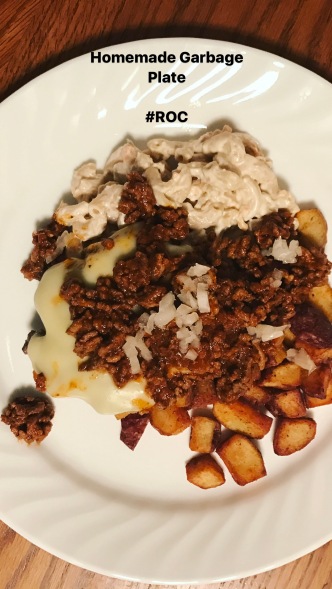 The problem is, I don’t live in Rochester any more and getting a plate is not as simple as a drive down the street to the closest diner. Since buying a plate was not an option when my most recent cravings kicked in I decided to attempt at bringing the garbage plate to life in my very own kitchen. 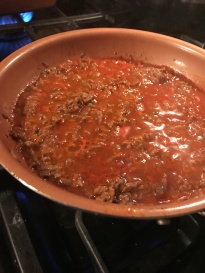 The first step in bringing the garbage plate to Albany was to find the perfect meat sauce recipe. Lucky for me, Nick Tahou’s, the restaurant who put the garbage plate on the map, had a website floating around on the internet (check out the recipe here) which turned out to be pretty close, although not nearly as perfect as the real thing.

While the meat sauce was simmering I started making the home fries from scratch. I took a couple potatoes and cut them into small pieces, seasoned them up with a bit of salt, pepper, and cajun seasoning for added spice. I heated up the oil and cooked the potatoes until brown. While traditional garbage plates often have two cheese burger patties, one was enough for the my own plate. Although I made the sauce, burgers, and home fries from scratch, I ended up cheating just a little bit on the macaroni salad, buying a pre-made container from my local Whole Foods. 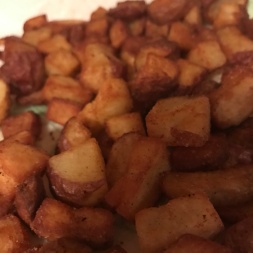 Overall, my homemade fries were way too salty and the meat sauce came out a little bit too thick, but my first attempt at making a garbage plate was a success. Have you ever made a garbage plate yourself? Was it a success? Let me know in the comments!

As always, stay up to date on my food adventures on Instagram @erin.eats.upstate